The Acer Aspire R 13 Review: Convertible Notebook With A Twist

The world of the convertible Ultrabook is a very competitive segment now, with some different designs trying to win the consumer’s support. The Acer Aspire R 13 has certainly moved in a different direction than the competition. The U-Frame is certainly the key part of the R 13 and is really the differentiator over the competition, but the design of the hinge does not stop with just the ability to rotate the display. Acer has created a dual-torque hinge on the R 13, and this allows the display to be opened with one finger all the way to 90° and after that, the hinge tightens up in order to give a better touch experience. It is a very cool effect and helps quite a bit with touch use on this device. The hinge will continue open to almost 180°. 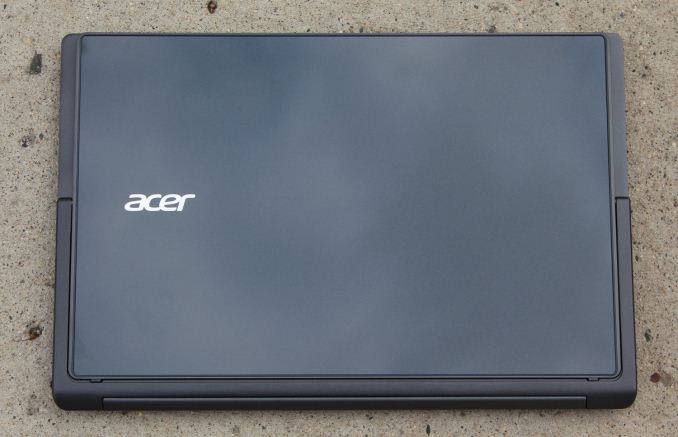 The overall build of the R 13 is entirely of plastic, and it is very subdued in a matte black finish. As I said earlier, there is a lot of competition in this space, and the competition has some more eye-popping designs. The R 13 has only the Gorilla Glass covering the back of the display to make it stand out from the crowd, with the Acer logo backlit by the display backlight. Compare this to the HP Spectre which is made entirely of aluminum, or the Yoga 3 Pro with the watch band hinge and choice of some interesting colors, and I find the Acer to be missing out here compared to the competition.

The R 13 supports an active pen digitizer, and it appears to be a Synaptics unit. When using the pen, you are writing on Corning Gorilla Glass 3 so it is nice and smooth, which is the same glass that covers the back of the display as well to give the device a more premium feel. However I did find that the display has quite a bit of deflection when using it with touch or the pen, so the thickness of the glass panel over the top is going to be minimal. 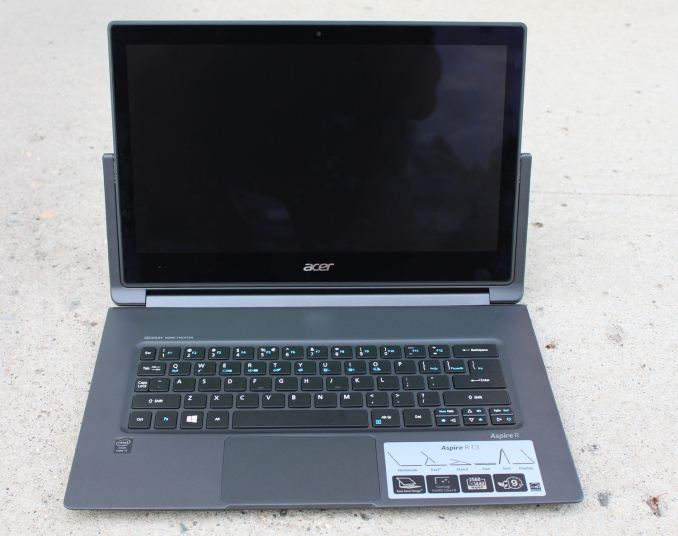 A good portion of this device’s life is going to be used in notebook mode, so let’s take a look at how it stacks up there. For connectivity and accessories, it has two USB 3.0 ports and one USB 2.0 port, and it also has an HDMI port and SD card reader. The webcam is a 720p model, and it of course has a 3.5mm headset jack. The power comes from a dedicated DC-in barrel connector, but I was not in love with the power connector. The barrel is very thin and feels not as robust as other barrel connectors, and I also had some issues getting it connected and disconnected. It’s not a deal breaker, but some attention could be spent here by Acer.

The backlit keyboard has a couple of different levels of backlight intensity, and the soft blue color was a nice touch. The keyboard itself is not one of my favorites though. There is no dedicated function row, so many of the standard functions are packed into standard keys. I don’t really see a reason for not having the sixth row of keys, because unlike the Yoga 3 Pro which has a similar keyboard, you should never be holding the device with the keyboard on the bottom like the Yoga 3 Pro. Due to the lack of keys, standard keys like the tilde have been packed into the same location as Caps Lock, and the delete key is on the right side of the spacebar. As a touch typist, I really don’t enjoy it when keys are moved without good reason. The keys themselves also have a fairly mushy feel. 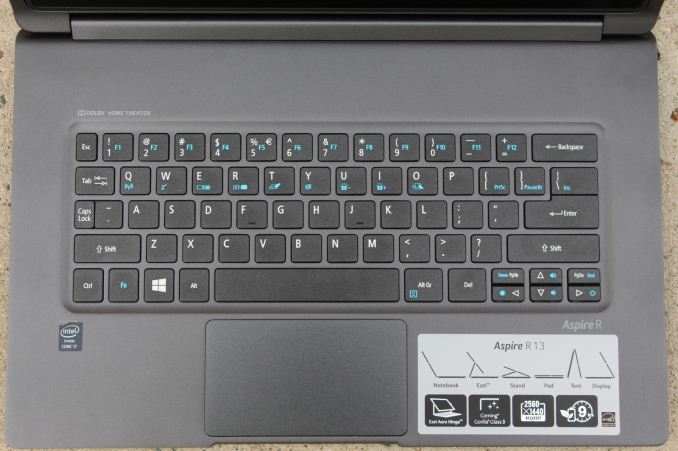 The clickpad is a nice size and is responsive. It is a Microsoft Precision trackpad, so the drivers are provided by Microsoft. This is good and bad, since Microsoft is trying to standardize the trackpad experience on Windows, but there is not a lot of customizability with the drivers unlike some of the other devices out there. For me, it is all I need in a trackpad, but for those that like the three and four finger gestures, there is no support for them in the current build of Windows. The plastic surface of the clickpad was fairly easy to glide my fingers over, but on a higher priced device like this Acer I would have preferred something like glass. I did not notice any lag or delay when scrolling on this trackpad, which is something that I have been asked about on other devices.

The final part of the notebook usage model is size and weight, and the Acer is certainly not the smallest nor lightest device out there. At just over 3.3 lbs, or 1.5 kg, it is at the heavier end of the 13.3” Ultrabook lineup for 2015.

There is always going to be more compromise in a convertible device than one dedicated as just a notebook, or just a tablet. The trade-off though is versatility, so let’s go through the other modes that the Acer brings to the table.

First up is the pad (tablet) mode, and as with most of the convertible devices which have the components in the base of the device, it is not an ideal tablet. When closed, it is 0.71”, or 18 mm, thick. That is 10 mm thicker than, say, the Microsoft Surface 3 tablet, and the entire package is over twice as heavy. None of these devices make great tablets, so this is the one mode I would likely use the least. 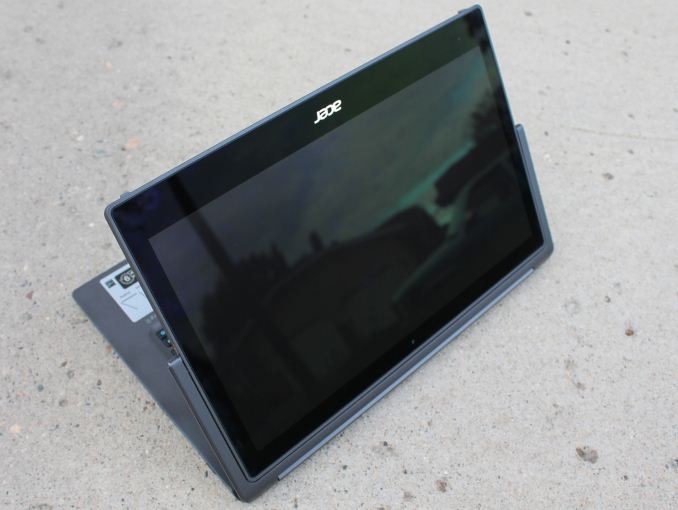 Display Mode can be used for watching content, and this is one mode that I do use quite a bit on convertible devices. If you want to set the device down on something, or even on yourself, it is a great way to consume content and it keeps the display nice and close without you having to hold on to it like a tablet, which minimises the weight penalty over a traditional tablet. 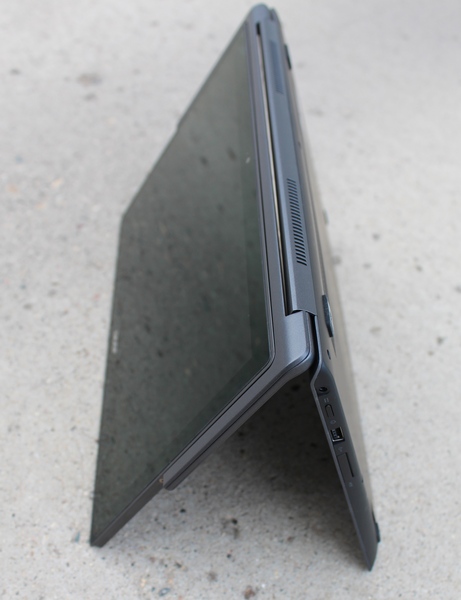 Tent mode is also very useful, either when in cramped conditions such as in an airplane, or when you have a table to set the device on and want to use it in touch mode. The inverted V makes it very strong and stable when tapping on the display. 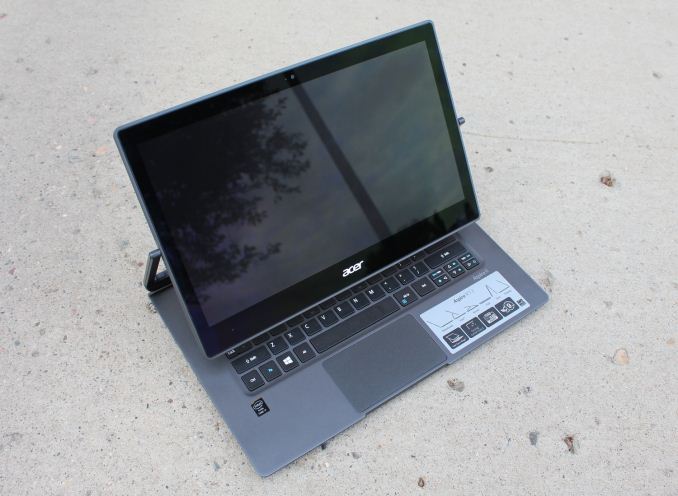 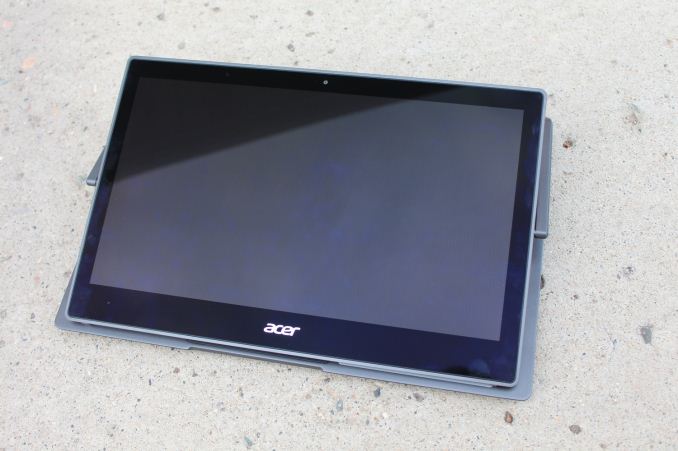 Those are the four “standard” modes for a convertible notebook, and Acer adds on the two additional ones of ezel mode and stand mode. Ezel mode props the display up and brings it closer to your eyes, while still giving access to the track pad. It certainly looks interesting, but I have to admit I’ve never felt the need to use it in this mode. The second mode though is much more useful, and that is the stand mode. Swivel the display down a bit more, and it very much resembles the Surface line when the stands are all the way open, and it makes a great base to leverage the pen. However both of these modes are spoiled by a big flaw. The Windows 8.1 touch keyboard does not operate unless the display is almost entirely folded flat into tablet mode. Since you can’t get to the actual keyboard in either of these modes, it is a big issue and I am not sure how this missed quality assurance. It does work in display mode and tent mode, so it is just the two unique modes that it does not seem to function in. This is a fairly major oversight.